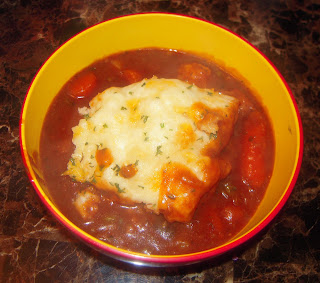 My mother in law I think makes the best Beef Stew and she tops it off at the end with Bisquick Dumplings. My mom makes a great one too that is very different than the typical Beef Stew.  My mom always serves it with rice which is great.  I remember loving it while I ate it as a kid.  Both are great and very much different from one another.  This recipe is based on my mother in law's Beef Stew.  My husband has a funny story always thinking that Bisquick dumplings were the real dumplings that you normally see in old world recipes until we got married and I showed him what actual dumplings were.  I think though dumplings are probably any flour type noodle ingredient and nothing is wrong with the Bisquick dumpling.  They are perfect for stews because the are great to soak up the yummy gravies in dishes.  For instance my mother in law's beef stew.

For the longest time my mother in law wouldn't give me her beef stew recipe.  We always had to wait until she would make it in the fall/winter months.  I was craving it one day and she finally gave me the recipe.  Also I think she probably thought I would eventually figure it out.  I remember one day I asked her if she used tomato sauce in it and she said, "Maybe".  It was a matter of time.  Then one day she gave in and gave me the most important information on making it and it was McCormick's Beef Stew Seasoning Packet.  Oh Lord, all this time and it was a seasoning packet.  It still didn't explain the tomato factor and it was tomato sauce after she told me how she would put it all together.  I am now happy to share it with you.  I know it's a seasoning packet recipe but what you end up doing yourself to the stew kicks it to another level.  I added much more to this stew to make it my own.

I know probably the one question is, "Did it taste like my mother in law's?"  Well yes and no.  Nonetheless is was just as awesome.  Husband rated it 10/10.  I even said he could tell me if it wasn't that good and he said that it was.  So Mr. Picky Eater enjoyed it.

This gives you a rich thick Beef Stew.  I never used seasoning packets before so this was kind of cool to have all the seasonings I needed in packets.  This made a lot so it could easily feed 6 adults.  My kids liked it especially my son.

Stew:
In a large stock pot place Olive Oil in pot.  Dredge your cubed stew meat with the flour.  Put meat in pot and cook until browned.  Pour in water, tomato sauce and seasoning mixes into pot and bring to a boil.  Place vegetables in pot.  Stir.  Season with seasoned pepper blend, salt and garlic powder to your taste.

If you'd like your stew thicker you can make a slurry by taking the beef stew sauce and mix it with flour in a separate cup.  Then add to the stew and stir.  Boil stew and cook until vegetables are tender.

When adding dumplings add to the end when stew is done and you are getting ready to serve about 20 minutes before serving.

Dumplings:
Mix milk and mix together then add in cheddar cheese, garlic powder and parsley.  When stew is done drop by spoonfuls on top of stew and leave the pot uncovered for 10 minutes over low heat.  Then place lid on pot and cook dumplings an additional 10 minutes until puffed up.  I sometimes brush the dumplings with butter then sprinkle garlic powder on top, but that's optional.


Dredged meat in pot with olive oil and browned.
(I used less meat this time, that's why it doesn't look like much)
You can also splash some red wine at this time if you'd like. 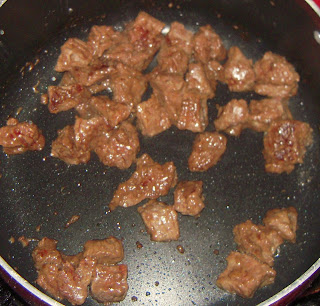 All ingredients added including vegetables. 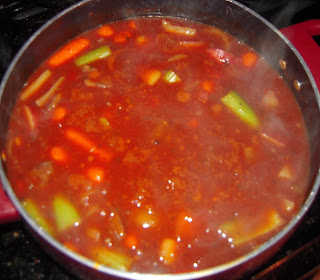 All ingredients mixed together for dumplings. 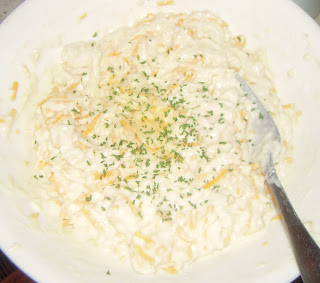 Dumplings added to top of pot for 10 minutes then place lid. 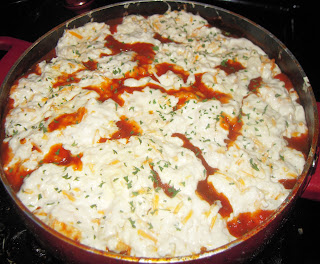 Wait for dumplings to puff up in pot then serve in bowl like this and enjoy!