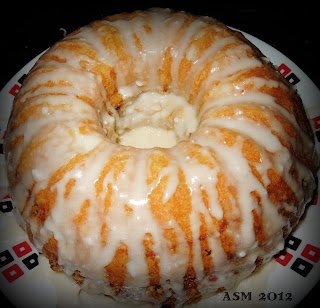 Scott came home today with the Wednesday Recipe in the local newspaper.  This recipe was actually one where I had all the ingredients.  I thought why not and give it a try.

It's a pretty straight forward recipe and not hard to follow.  I think the only recommendation is to cook it a little longer than what the recipe said.  Other than that, it's outstanding.  It's moist and melt in your mouth.  Buttery and Sweet.  I don't think is the typical coffeecake.  It's a bit heavier than most coffeecakes but so good and dense in a sense.  I loved the filling, like a cinnamon roll.  I also used Brown Sugar instead of regular sugar in the filling as written in the recipe below.  I added some cinnamon into the batter to just give a little more cinnamon kick but you can skip that if you'd like.

I baked mine into a bundt pan but the recipe didn't state whether to bake in a 9x13 pan or a bundt pan.

I really love the taste of it.  The whole family loved it so it's a winner and added to my list of recipes.  I think the newspaper however needs to recheck their writing on how to completely write a recipe out.

If I had to describe this cake it was like eating a cake, a cinnamon roll and a donut all in one.  Yes, it was that good!  So if I had to call it something, I guess I would call it a Cinnamon Roll Coffeecake.  Perfect to serve at Breakfast, Brunch, Coffee or Tea or as a dessert after dinner.  This would be great for any Tea Party!

Cake Directions:
Cream Butter and Sugar.
Add Eggs, one at a time, beating with each addition.
Add Sour Cream, vanilla and almonds extracts, sprinkle of cinnamon (cinnamon optional); beat well.
Sift together Flour, Baking Powder and Salt together and add in wet ingredients.

Bake for 1 hour until toothpick inserts comes out clean.

When cake is cooled, either dust with powdered sugar, leave plain or glaze it with the following glaze recipe. 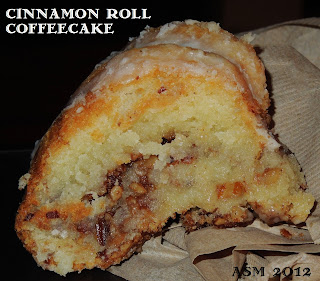 Sugar & Spice and Everything Nice!
Annamaria
Posted by Artbyasm at 11:13 PM