This will probably be a short blog but I thought since I mentioned Double Dragon Buffet in my last post I should probably give them their own review. Now I am not much of a true fan there but I do sometimes crave a few things from there and I will run in and either order a fresh container of something or grab a box and head to the buffet and fill it with a few of my favorites. Depending on how much the box weighs reflects on how much you might pay. Maybe it's around 4 bucks a pound of food or something like that but don't quote me on it.

I like a few things from there but I usually don't go there to eat Chinese Food. I order my Chinese Food from China Jade in Parma. But when I have a mad craving for crab rangoons, chicken teriyaki skewers or those sugared donuts, which I will post a recipe for the sugared donuts at the end of this post.

They by far have the best crab rangoons I ever did see or eat. They are filled so much and are perfectly fried up. Maybe not so healthy but they are yummy. Another delish staple they have is the Chicken Teriyaki Skewers, they are juicy pieces of meat deeply marinated in teriyaki and roasted or something. My daughter even loves them and she loves that Sakkio Japan's Chicken Teriyaki with Soba Noodles instead of rice. Then finally Double Dragon has some awesome sugared donuts. Now I don't know how these little sugary treats ever ended up on a Chinese menu but they are good especially fresh.

One thing I will suggest that is awesome about Double Dragon Buffet is when I have a party they offer catering. I will get the Crab Rangoons and Chicken Teriyaki Sticks/Skewers for my party as an app or as some filler foods for some kind of get together. It's great to bring to a party. They put them in those big silver containers covered and ready to be picked up. Very reasonably priced too.

Now I know they have crab legs and you can have all you can eat but sometimes I've seen those lines and just think those particular crab legs are worth fighting the line. One time I literally watched people watch each other and watch the door for the cook to come out of the kitchen. I feel like people were being tortured by the wait. I wonder if the people that work there secretly laugh at the crazy Americans run up to the crab legs. It is kinda funny. I think it's cruel too because you would think that these places that are all you can eat and offer crab legs and know they are going to run out in minutes would provide a few more sections so that people could have more and not run out of them before they have to wait in line again.

All you can eat crab legs is a rarity here in Cleveland and I've never heard of any places around here that offer it as much as a Chinese Buffet does. Many people think it's worth it at a Chinese Restaurant for the crab legs because really you can pay about $11 to have all you can eat crab legs. But the hassle I think is not worth it and it's really not the best crab legs on the market. To also see them in that water bath is just gross too. A big put off.

So you may like Double Dragon's buffet and think the crab legs are worth it then good for you. But I'll pass. Plus I always feel so sick after eating there in the past that I just thought to myself it's really not worth it. So just eat better Chinese food and get some of the savory treats I mentioned. You'll appreciate what they have that is good a lot more.

So like I said, their crab rangoons are pockets of goodness like this, if you wonder if they have been sitting on those hot lights for a while and taste a little stale you can always order a fresh batch to go or ask them to make a fresh batch for you. 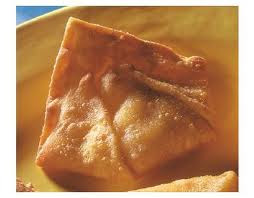 *Photo off the internet, unknown source.

Then on to the Chicken Teriyaki Sticks/Skewers. They're a great piece of meat and marinated thoroughly. Again you can order a fresh batch and also have them for your next party or get together. My daughter loves them and she's only 7. They are also great reheated. 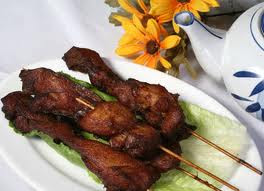 *Photo off the internet, source unknown

Lastly those scrumptious sugared donuts, which may I add are just fried biscuits rolled around in sugar. Yes they are that simple. I know this because when I ate at another Chinese restaurant the waitress told me how they made them because I was baffled at how they are served at a Chinese Restaurant and so she thought it was funny if she told me how they were actually made. I was baffled, just baffled. I would like to know the story as how they ended up in Chinese Restaurants. Although sadly China Jade does not offer them on their menu, maybe that's a good thing....lol. So here is the pic of the sugared treats.... 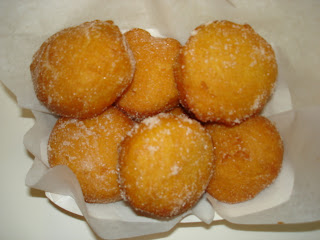 *Photo off the internet, source unknown.

As promised here is a recipe of those pillowy sugared delicious treats. Hope you make them and let me know if you like them as much as I do and everyone else I know too.

Now that I think of it, these are like the Americanized or Chinese Buffet version of the Italian Zeppoles. That's another blog....

Chinese Sugared Donuts
-A tube of your favorite Buttermilk Refrigerated Donuts (more if serving a crowd)
-Oil for Frying
-Granulated Sugar for rolling fried donut in.

Steps:
1. Place vegetable oil in a frying pan and heat it til it's hot hot hot.
2. Fill a bowl with sugar to coat donuts when they come out of the oil.
3. Remove biscuits from tube and set aside until oil has reached hotness.
4. When oil is hot enough (you can tell by snipping a small piece of dough and see if oil sizzles and bubbles around dough)
5. Gently place a few biscuits in oil and fry until golden brown on each side, you'll have to flip them to get golden brown on each side.
6. Shake access oil or drain oil off donut on a plate lined with paper towels.
7. Toss hot donuts into sugar and roll around until completely covered.
8. Place in serving dish and serve donuts still warm.

*They are great served with vanilla ice cream and caramel ice cream topping.

Happy Eating!
Annamaria
Posted by Artbyasm at 11:09 AM