Having a busy day with the kids it was time to eat lunch. I didn't quite know where to eat. I wanted to try something new and my friends at Alto Capelli told me a few places and one of them was 56 West. I've wanted to try it so I decided to go there. We parked on the street at a meter which always scares me and getting the kids out of the car. I hate getting out of the car on the street but I always wait until I see no cars coming for awhile. We went into 56 West and it was pretty much empty. I almost decided not to eat there but I figured I was just going at a time and day that most people wouldn't pack up a restaurant. It was small and dark. It wasn't appealing and no workers were around. If it wasn't for a table that 2 people were sitting, I would of thought it was closed.

Finally a waiter came and I saw a young kid in the kitchen. We were seated and were told the special which was mussels available in different sauces. I don't like mussels despite the fact I grew up in a family where mussels were a staple. Not for me, I will pass. The other table said they were good. I'll just take their word for it and say that others thought they were good. I heard their burgers were good but I didn't want to eat a burger and have to tell you all that they have good burgers so I opted for the Picnic in the Park, which is pulled pork piled high with stoneground mustard BBQ sauce, brie cheese, sultry slaw. I ordered the kids Mac & Cheese and I also got what is supposedly what they are famous for on their menu is the Potato Casserole. The waiter was really nice, he treated the kids to some strawberries while we waited and made sure we had refills while we waited for our food. He was very talkative and so kind to my kids that I thought it was refreshing. Since it was slow I am sure the waiter enjoyed the conversation and the kids thought he was really nice too.

So we got our food. The Mac & Cheese of course I had to try was really good, the kids gobbled it up. My daughter also got a salad, she's used to having ranch dressing but they didn't have ranch dressing in their list of dressing. So I got her to have the Green goddess. She loved it on her salad. I tried it and it was a good dressing. 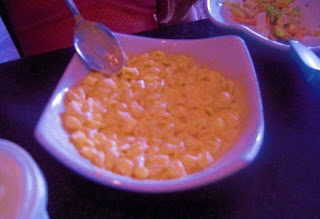 I got my sandwich and my potato casserole. The sandwich was good but it was missing the Brie Cheese on the sandwich, a disappointment since the cheese would of provided some gooeyness to the sandwich. It wasn't really fully flavored and the meat was a little dry. The slaw was good. I mean I can't really say the sandwich was terrible, it was good and big. The cheese would of been a plus if I got it but I just wasn't in the mood to complain or question. I certainly didn't want to wait them to make another because at this point the kids were getting restless and tired.

Picnic in the Park 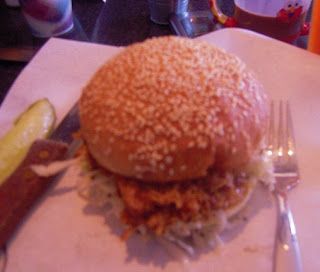 The potato casserole was gross. I have no idea why they called it a casserole. It was big chunks of undone potatoes with scarce amount of cheese and flavor and the topping of the cornflakes were burnt and just ruined of what could of possibly been edible. A potato casserole is nothing like what was served to me. Whenever the word casserole comes about you expect this piping hot gooey mess of combinations of ingredients. This dish was nothing like that. I would recommend them rethink this dish. The food wasn't really hot. But after a busy day I was hungry and I really hate sending food back or complaining in front of my kids. I just don't want them thinking that they are too good for something I guess. I try to be humble and grateful. Even though I think the food I personally got would of been valid to complain about.

Here is the picture of the casserole called, ME¹NAGE A TROIS POMME FROMAGE translated to Three different potato cheese casserole: 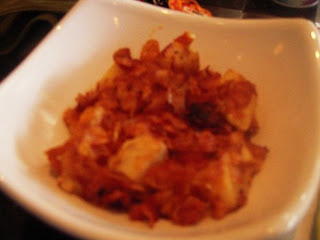 It was nice to try something new and the best part of it all was the waiter, salad and mac & cheese. I am sure my sandwich would of been better with the Brie Cheese. It seemed whenever a dish called for cheese it seemed to lack it in taste and in presence. I don't think I would go back. Who knows? Maybe if it's more busy and happening. I think the kid cooking in the kitchen might of been a little inexperienced. At least that what the dishes seemed that came out of there for us. I was a trooper during this experience and really wanted to love it but I can just say it was okay. Lakewood has many places to eat and I don't think if I am in Lakewood again I would go back, but who knows what the future holds. I think if I did go back I would like to try their build your own burger, sweet potato fries and perhaps their Brunch. I will say that I would say it's good eats if you take my advice and try other than what I got. I want to give it another chance, so I will post it in my Good Eats section of my blog.

So take my advice and be a bit more cautious in what you order and make sure you get it right. It's a kid friendly spot and my daughter had a great time, she managed to find a vent on the floor when she walked over it and it blew up her dress in a Marilyn Monroe fashion in the movie "The Seven Year Itch". Here's photo of her over the vent, it was hilarious and really got me laughing....

My daughter is such a trip! LOL! 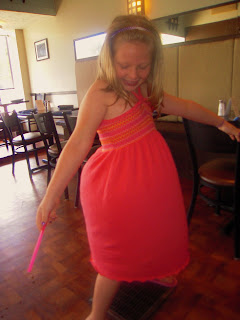 Advertisement for their Brunch:

Til Next time, wishing you Good Eats!

XO,
Annamaria
Posted by Artbyasm at 2:30 AM

Email ThisBlogThis!Share to TwitterShare to FacebookShare to Pinterest
Labels: Best In Cleveland