How I got there: Back in October of 2000, I was in Miss Italia Ohio. We all had to get sponsors and I had mine and the girls had theirs. Most of them were local Italian business owners. Everyone knew someone. I had a few bakeries and maybe one other type of business. They were all printed in a pamphlet that had a page ode to every pageant contender and their story and interests, blah blah blah. I was nominated by my Godmother. (I really wasn't happy about it, but nonetheless, didn't want to let her down, so I did it. {I did win and place 3rd., hee hee top three (including Miss Italia Ohio) were prized and given honors, of course I thought I should of been Miss Italia Ohio.})

In the back of the pamphlet was all the sponsoring businesses for the pageant. One of them being Michael Angelo's Bakery, I was taken back when I saw the word Chocolatier! Chocolate???? We didn't have a bakery that included chocolate confections here except your name brands that stores carried. At the time my love of chocolate and baking creations were beginning to blossom. So I reminded myself that I would go there someday. I shouldn't of waited 4 years! But I did. As far as the pageant goes, that's another blog... ;)

I feel a tinge guilty since my Aunt Vicky had her own bakery, but she's an older school baker, Italian Bakery that featured the very staples of every Italian bakery. She's great but I wanted more and being an artist I wanted more of a creative confection. Don't get me wrong my Aunt's a great baker, but she has since slowed down and closed the bakery since my father's (her brother) and my Uncle's passing (her husband). My Uncle and Aunt together were the core of that bakery, no outside help except family, mostly her children. In her right she needed to close. But she remains a great baker of breads, cakes and cookies!

But my dear Michael Angelo's, how have you won my heart! I have been going to this bakery since 2004. I saw it before it was remodeled and before they expanded their lucious confections. I too had expanded my confection creations and Michael Angelo's really influenced me in a positive way and all the sites and smells made me want to come back more and more. Also now I live closer, not that would matter because I would still use them if I didn't. Now about Michael Angelo's....

They have this CLEAN and MODERN atmosphere. Everything is well placed and SET. You can tell that they take pride in their work and their name. It's owned by a family. The Ciocca's. Main bakers and reps are the cutest Band of Brothers! Matt in particular has handled everything that I have ever needed. So if you see him or ask for him, tell him I sent you there. No there's no coupon or discount in it and I get nothing out of it, but it shows the comittment that their patrons have for them. You'll be doing the same I am sure of it. Today bakeries are advancing their designing techniques on cakes, cupcakes and desserts. Yes Michael Angelo's does too, the difference is that they're not full of themselves and DO NOT charge you an EGO FEE like many upscale bakeries. The other thing you may ask is: IT MAY LOOK GOOD BUT DOES IT TASTE GOOD???? Yes and I mean Y-E-S! Like Papa John's say: Better Ingredients, Better Pizza, okay that's a bad example but as far as Michael Angelo's goes it applies, just not the pizza part, but I am sure if they made Pizza that would probably taste great too. I am sure they would make you a cake that looked like a pizza if that helps with the concept.

What have I purchased there? Just about everything! Everything tastes good and not just myself, but everyone who's ever tasted anything I have ever bought from there. Including my kids birthday cakes, my baby shower cake, my own birthday cake and my brother's wedding cake, along with all the awesome desserts they have. They have a lot of Italian treats as well as the new modern takes and tastes! If you need a picture to see how much someone likes a cake just look at the picture.....


This is my husband feeding my son Johnny his own birthday cupcake... It was a great party and the perfect day! 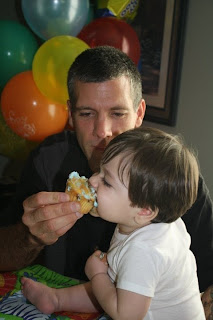 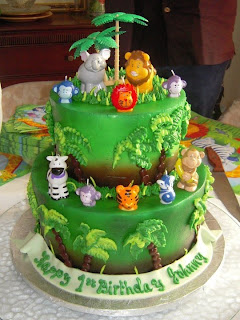 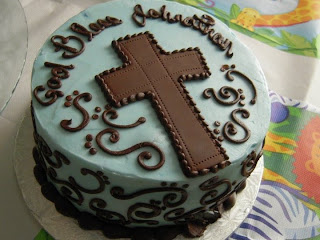 My birthday cake (and it was a snow storm that day, it was for my 30th. birthday). My cake was a smaller scale of this, Chocolate Cake with Chocolate Mousse. Can you tell I am a chocolate lover?

Michael Angelo's staff is friendly and their goodies go fast, they have a huge morning rush so if you need large quantities of something, I would preorder it. Want to know some of my favorites? Here goes: The cakes of course, cupcakes, tiramisu (just like my mamma makes), cookies-pretty much all of them. They're cassata cake is soooo good and better than Corbo's for you Clevelanders! Everything is fresh! The danishes are awesome and go quick. Cheesecake, Tarts, Pie, Fresh baked Bread...OH MY! The chocolate confections are great and they have many in packages that would make great gifts! The coffee, well let's just say I don't buy my coffee anywhere else. The many different flavors and seasonal flavors make your head spin! You can have them freshly ground or already ground. You can choose from 1 pot packages and your standard coffee bag size.

Personally I love the chocolate coconut bars and a cafe mocha, I'm set. Really I love everything, depends on my mood.

Grab something for your next party, make a gift basket, order your wedding, birthday or special occasion cake. I am sure with everything they have. You'll find your favorite and if you don't well your just crazy and probably don't eat sweets... >>GASPING AT THE THOUGHT!<< Do I need to say more? In case you need more, I don't have to say much because you can check them out online, which their website is always being updated with yummy goodness, not only on their website but also on Facebook! Who isn't anymore these days? If you're not then what are you waiting for????

Who says you can't find anything in the suburbs? You're just not looking hard enough!