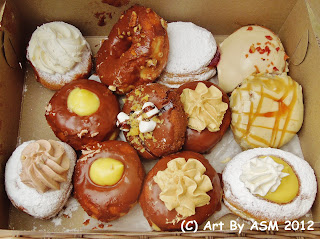 Making Delicious Fresh Donuts since 1937!
I don't know how many of you have heard or have tried of Jack Frost donuts but they are a great little spin on the typical donuts if you haven't guessed by the photo above.

Jack Frost has been around for a very long time here in Cleveland and it's too bad not many have tried it (shame on you!).  The donuts are always fresh, flavors are different on some days and they are quite little fresh beauties

These are Maple Frosted with Vanilla Cream on top.

My daughter and I thought we would pick up a box (a dozen) at about 10:30am on a Sunday after church and her communion class.  It was packed!  It was hard to move.  Now they're open until 8pm most nights but I don't know how they keep up with demand.  I was afraid about time I got to the front of the line that the donuts would be gone.  We consider Jack Frost a treat.  They are decadent donuts well deserved to be shared with coffee, tea or a tall glass of milk!  I couldn't believe we didn't have them more often! 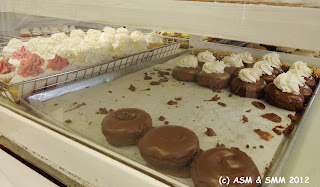 These are probably the freshest donuts I've ever had next to Krispy Kreme's hot off the conveyor belt glazed donuts.  The demand for them have to keep them coming and they were so fresh most of the donuts glazes haven't set yet.  The chewy yeast donuts are my favorite.  Not all of them are over the top, you have your typical glaze and on the weekends you can find cruller donuts, sometimes in various flavors too.  What really caught my eye is their jump of the band wagon of modern flavors like Maple Bacon, Snickers, Smores and Red Velvet.  Taking the typical donuts flavors to the next level.  The Banana Pudding and the Peanut Butter ones are my favorites!  Unfortunately I didn't get my hands on the Banana Pudding one because the Donut Monsters in my house ate it before I did.  I did manage to get a Peanut Butter one and it was so good!  Yes the donuts monsters is Scott who could despite his size could eat a whole dozen and my children....  My Johnny who almost 3 ate the Maple Bacon among others! 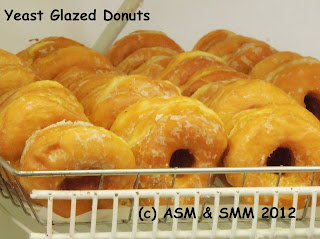 My daughter loves to take photos so most of them are taken from her and she's only 8.  She loves to help me with my blogs!  My great assistant!

It had been awhile like I said before since I have had Jack Frost, I promise though it will not stay like that.  I have seen though some crazy creations and since I am a baker/confectioner myself I can appreciate the crazy flavors like M&Ms, Fruit Loops, etc....  I wonder if they ever made a Cocoa Puffs, Scott would freak!  LOL!

Sofia is a glaze yeast donut girl and Johnny well if it's good he'll eat it and the sweeter the better.  He could down a donut or 2 with milk a must!


Now on Jack Frost's Facebook Page they asked for donut flavor suggestions.  Now if you know me you know I am going to suggest a Nutella Donut!  I did!  Hee Hee!  Of all the same suggestions no one thought of Nutella!  I hope to see it made in the future!  So here's my thoughts on the creation: Yeast Donut filled with Nutella, Powdered, topped with either a Peanut Butter or Nutella Cream Frosting, Drizzled with Chocolate Glaze and then topped with finely ground Hazelnuts (of course I also suggested skipping the ground nuts in case people don't want it, which I know my daughter wouldn't, she'll just take everything except the nuts, she likes the flavor like in Nutella but not the texture of a nut).
I've also suggested Banana Pudding Pie (yeast donut, powdered, banana pudding filled, top with a Whip Cream piping and finely ground vanilla wafer crumbs and one cookie to top it off)  French Silk Pie (yeast donut, powdered, filled with chocolate pudding, topped with a whip cream piping and topped with mini semi sweet chocolate chips and a Coconut Pie (yeast, powdered, coconut pudding, whip cream piping and sprinkled with toasted coconut.  Also with Carrot Cake and Pumpkin Spice Cake and top of those two donuts with a cream cheese filling/cream piping and a Lemon Meringue Donut....
I can't suggest enough that you have to get Jack Frost Donuts.  I am glad that I was reminded of what a good donut was when I bit into one.  It's no wonder that they are still in business.  I hope you don't think that Dunkin Donuts are real donuts, they may look like it but they are deceiving and stale all the time!  Jack Frost is the place that let's you experience a fresh donut the way it's supposed to taste!  Freshness is Key!
Next time you are looking for dessert after dinner or anytime, save yourself and get some Jack Frost!
If you have any questions about flavors of the day, call ahead orders give them a call, they are a great friendly staff.  The have hot coffee and beverages available as well.  You may have to wait in line or not.  On Fat Tuesday, you better preorder!  They also make Paczki (poonch kee) which will run out if you don't preorder for sure!
They take Checks with ID and Cash, no credit/debit cards.
Visit their Facebook page:
Jack Frost Donuts on Facebook
HOURS:
Monday-Saturday: 6am-8pm
Sunday: 7am-8pm
Phone: (216) 351-3638

Have a Sweet Week & A FAT TUESDAY!
Annamaria
Posted by Artbyasm at 9:44 AM