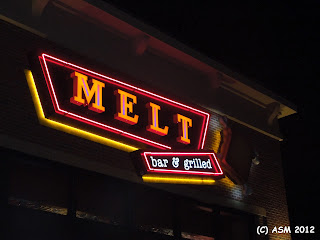 *****Don't forget you can follow my blog and other news via Facebook, just click here and LIKE the page!  Thank you for your support!
Me On Facebook
Well where do I start here?  I think one day a boy named Matt Fish wanted to open his own place where people can eat some amazing concoctions and built up the infamous grilled cheese sandwich.  It wouldn't be just any place.  It would be a part of him, who he was.  Featuring some of what Cleveland has to offer and the Cleveland Scene.  That meant music, tattoos, Art!, good food and brews and he would entice people to come in with this concept to become part of his family.  A crew, where you can brand yourself to be part of a forever family with it's infamous logo tattooed somewhere on your body, big or small and you'll get 25% off for life on your orders!  That's a commitment both from owner and customer!
Now these aren't your typical grilled cheese sandwiches and there is certainly more to offer.  Sandwiches of amazing precise concoctions thought in the mind of Matt Fish and I am sure his friends.  You can't even imagine what he'll come up with next, but I can be certain it will be good.
Every month a new sandwich appears as the sandwich of the month.  Customers salivate waiting to hear for the next creation.  It's like you know you're going to try it unless it's ingredients aren't your cup of tea.
Like this month, Melt got creative and really sucked us in with not just 1 fabulous sandwich, but 4 different sandwiches.  1 changing every week.  Whaaaat?, you may say, at least that's what I said.  How can I, when can I, what is it, should I, how can I not.  Well I didn't, that would be crazy for me but I know others have attempted the weekly concoctions and the month isn't over yet!  This was all introduced with the Chinese New Year with it being the Year of the Dragon, how can you not play on that and uh cultural icon Bruce Lee to boot!  Here is the promotional poster from Melt: (I LOVE IT, I'M A BRUCE & BRANDON LEE FAN, Not mention I love ASIAN DRAGONS!)  I am after all, I am "The Girl With A Dragon Tattoo"! 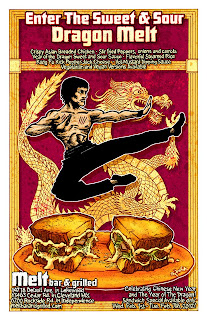 I didn't try it but I am sure it was awesome!
Melt opened up as a humble yet intricately decorated small place in Lakewood, Ohio.  There was a wait!  He then introduced Brunch which is fabulous!  It got so many raves and reviews all great mind you that Matt Fish had no choice but to expand.  Not only the first location but added additional locations in different parts of Greater Cleveland.  One may I add very close to home!  I knew it was going to be hard to keep Scott away.  I think he could of fainted when he found out.
We tried the Cleveland Heights location, but I didn't get the same feel as Lakewood.  Sometimes you lose atmosphere/originality, it's a risk you take.  It's huge and beautiful but doesn't capture the true essence of Melt.  Nonetheless, business is booming!  We couldn't wait for our location, then finally it did!  YAY!
I love our location that is close to home.  I love the workers there and everyone is so great.  It felt like home, well the original Lakewood location.  It has much of the same style and the blue patina metal squares on the ceiling, the huge bar, intricate art and details even down to the amazing sconces and lamps.  But one thing Matt has me hooked on that we share in common, is the obsession of holiday blow molds.  I have many although Melt has me surpassed.  Melt has some of the hardest to find blow molds that aren't even being made, that haven't been made for decades.  We have some of the same ones that are unique.  I guess that's why I appreciate this place so much.  I love the look and feel and I can totally relate to what he was going for.  Melt is Matt Fish's Playground!

Now to the personal experiences!  We've tried many sandwiches.  We've tried the specials and on the menu concoctions.  Family members and friends also telling me their feedback on their experiences.  All amazing I must add.  I haven't had a bad experience.  Well, one very funny one that was easily and quickly resolved.

One time when the Mama's Meatloaf sandwich first appeared I had to try it.  It was only the Lakewood location, we wanted Melt and surprisingly Scott drove to go and get it.  When he came back with our order, I began to check out this new sandwich.  Funny thing was, everything was on it except the meatloaf!  LOL!  Now I could of reacted very insanely, I mean it was the main part of the sandwich, how could they of missed it?  I called and they were very apologetic and sent me a gift certificate for $25 to redeem themselves.  I forgave them instantly.  I did however eventually get the sandwich when it appeared and featured again.  This is the photo of it below.  I enjoyed it but the one thing I would change is the fact of the flavor of sausage I taste in it.  It wasn't overpowering but I could of done without it.  Nonetheless though, I would eat it again.  The special ketchup on it is awesome and sweet, with yummy mashed potatoes and cheesy goodness!  Feast your eyes on this one.... 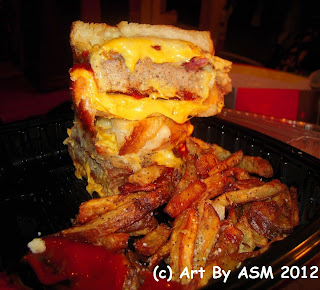 Here is Scott's Favorite, the Monte Cristo.  He usually always get double meat and double cheese.  As big as this sandwich is, it boggles my mind how they do manage to batter it! 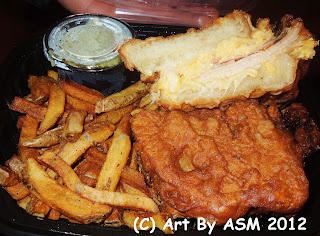 Here you will see the yummy Wake and Bacon.  You're ultimate breakfast sandwich!  Nothing beats eggs, bacon and cheese!  You can also have your eggs cooked to order. 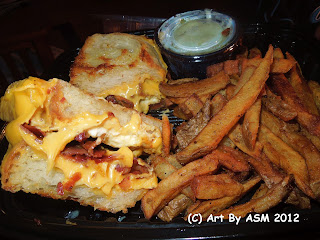 If you wonder what other sandwiches besides the ones above that we have tried, I've had The Corny Beast, which is a feature sandwich and not on the menu.  It's the concept of the Corn Dog in sandwich form.  If you do see it, it's definitely a beast to be reckoned with!  It's huge and tasty.  Took me 2 days to eat it and yes it's battered just like a corn dog!  You have your hot dog, cheese, bread and then battered in a corn meal batter.  So very yummy!


Here is the Beastly Corny Beast! 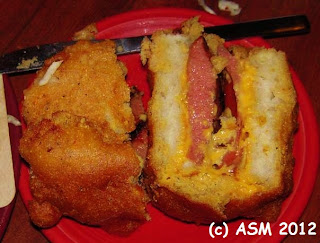 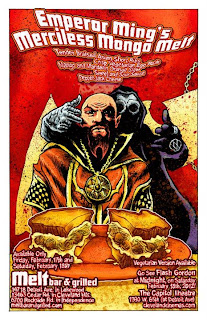 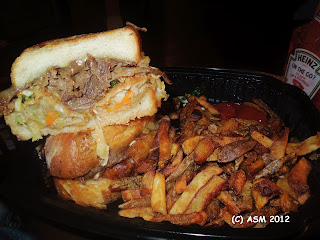 The above concoction I think is a clever rendition of an the Pulled Pork Sandwich, interpreted in Asian Flair!
I have also had the pleasure of eating their Paprikash Soup, it is my fave and I hope they continue to serve it and make it a staple!  The flavor is great and those dumplings are so good! 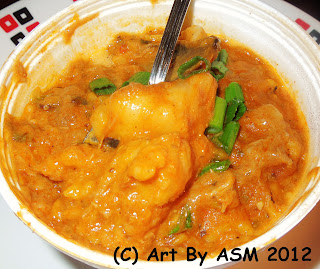 I have also had the Dude Abides, it's a gluttonous version of the meatball sandwich.  A huge monster meatball with cheese, tomato sauce and fried mozzarella sticks!!!!  It was a lot and put me in a cheese coma.  Felt a little uncomfortable on that one.  So I think I won't be doing it again.  I think it's a man's sandwich with a huge appetite.  It however was tasty!  Try it, I dare you! 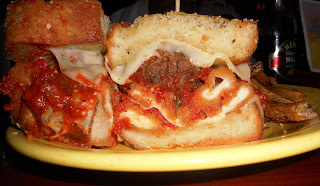 *Photo of Dude Abides via AlmostFoodie.com
(can you believe I didn't take a picture of my own sandwich?) 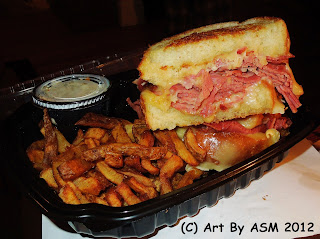 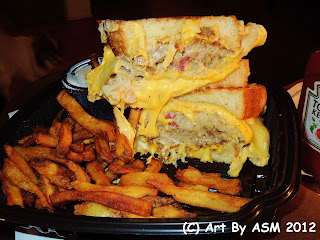 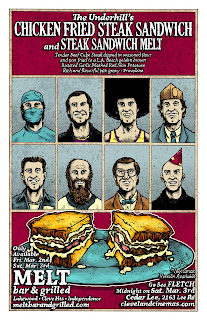 The Cheesesteak and the burgers are great as well.  We've had the pierogis as starters and the cheesecake, specifically the peanut butter kiss one.  All delish!  So if the photos don't convince you enough to try it out then you must need glasses!  Take my word for it and check it out and try it.  You will not leave hungry.  If you don't take my word for it then perhaps you will take it from Guy Fieri who visited it on Diners, Drive Ins and Dives or Adam from Man vs Food!  I've posted the videos below.  If you're feeling very daring you can take the Melt Challenge, with a monsterous amount of cheeses, huge amount of fries and slaw.  You eat it all and it's free and you get noticed!  Good luck!  I would like to have a bite of it, but I could never even think about doing the challenge.  It's crazy!
Here's the Melt Challenge Sandwich featuring 14 different cheeses.  Looks good doesn't it?  Crazy Good! 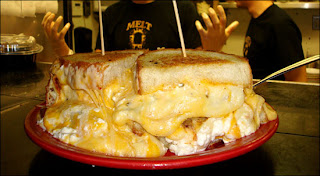 *Photo from Ibetyouwont.com
CHALLENGE RULES:
Challenge: The Melt Challenge consists of 14 different cheeses all held in place by 3 pieces of grilled bread, a pile of hand-cut fries & slaw. It weighs in at over 5 pounds of food!
People: 1
Time Limit: None
Prize: If completed you’ll walk away with a Melt t-shirt or Melt pint glass, $10 gift card and your picture immortalized on the hall of fame website.
Rules: No help from anyone and no trips to the bathroom. Sounds simple enough.
Enjoy these videos!

Diners, Drive Ins and Dives
My city gets a shout out in this!  Woot Woot!  PARMA!


Man vs Food (This also features some of Cleveland's Greatness!)
Part 1


This is the review mostly for the Independence Location however all locations are awesome!

*The only thing I would change, is the fries....sorry I hate to say it but it's true for me at least.

Have an awesome weekend!  Come to Cleveland if you haven't been here and check us out!
Annamaria
Posted by Artbyasm at 6:48 AM