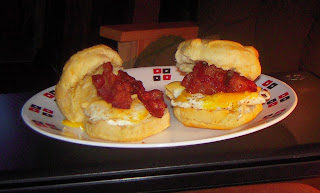 *Bacon, Egg and Cheese Biscuits for Dinner, YUM!
Did your family ever make breakfast for dinner?  It's like eating pizza for breakfast only opposite.  We always ate breakfast for dinner.  It's also economical.  Cheap eats and filling as well as oh so good.  I remember many memories of making breakfast for dinner growing up or my mom would do it.  I also remember having a big breakfast on Sundays.  It was the only day my dad didn't work.  Now thinking about it, my husband only gets Sundays off too being a mailman and all.  He is supposed to get rotating days off but they are busy and he's on the overtime list.  So my weekend starts and is only on Sundays.
I must admit and give credit.  I don't always cook.  Sometimes I don't feel like it and I'm tired and creative juices are not flowing.  So sometimes my husband steps up to the plate and cooks something.  I always laugh at him because he'll make grilled cheese, eggs, french toast (which is great) and some other simple foods,   when something comes out good he likes to make me think he's part of an elite group of men that cook for their family.  I told him men in the past and even now were the cooks.  Not in the home but in the business world.  Women weren't really the ones who paved a way in culinary schools and such.  Thanks to one cooking greatness Julia Child showed how women are just as creative in the kitchen as men and can be great chefs.  He also likes to remind me how he took cooking classes in high school which should also separate him from the rest of the boys. I remind him that "Home Economics" are offered in most schools in the USA if not all junior highs/high schools.  As with every reminder I thank him for making me something to eat.  I guess I should let him ride that pride for the day!  LOL!

Well that brings me to his one night of cooking he did for the both of us.  It was late, the kids were in bed and we finally decided to eat something for ourselves.  He decided he was going to fry up some bacon and eggs.  Top them off with cheese and place them on biscuits.  We had some Pillsbury biscuits in a can and he baked some.  I have to say as my husband agrees that bacon is just one of those great foods.  Although I am an animal lover, I can't help but feel a little guilty eating it.  It's just too good.  It makes me wonder how I spent many years as a vegetarian.

He made fried eggs.  He says I make them the best, he tends too pepper them to much.  I don't pepper my eggs.  I forgot to tell him not to.  In any case his creation was delicious.  I forgot what type of biscuits of Pillsbury they were.  I usually get Homestyle Butter Tastin from Pillsbury.  Very good biscuits on the fly!

So here is the masterpiece, I did arrange them to make them look great in the picture and they were as good as they look.  Kudos to my hubby.  Love You Scotty!


Feast with your Eyes!

So fry up some bacon, make some fried eggs, bake some biscuits and add some cheese and voila, you have yourself a Bacon, Egg and Cheese Biscuit!
Good Cooking Wishes,
Annamaria
Posted by Artbyasm at 5:42 AM