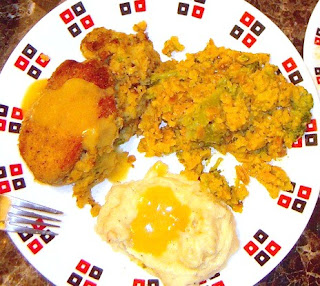 Let's start off saying that I HAVE TO GET a new Camera.  My point and shoot Nikon digital camera just isn't cutting it for these blogs and food presentations.  So any suggestions on a good camera is well appreciated.  I fear that it's going to be an costly investment.  My mother in law has a good camera but I am sure she wouldn't want to come over to document my recipes....

I have been meaning to make stuffed pork chops.  This fascination with them at how great they always looked.  But I was scared because pork can get really dry really quick.  Also what if the middle didn't cook, what if the stuffing was not heated through.  So many things could go wrong and I didn't want my husband to be disappointed.  I would eventually get over the failure but he would from time to time remind me of it and probably not encourage me to try again....  LOL!

So I pondered it.  What can I do that would help not to dry it out?  So this is what I did.  I know they are normally not breaded but I thought that providing a protective coating would keep the moistness in.  Maybe it will help and maybe not.

I took a brownie pan, I was only making 3 breaded and stuffed pork chops.  They are also boneless, next time I will try bone in.  They were thick pork chops and I had my butcher butterfly them.  Never asked the butcher to do things before, I guess it's part of their job.  Thank goodness because there are no prepackaged butterflied pork chops.  He was also really nice! 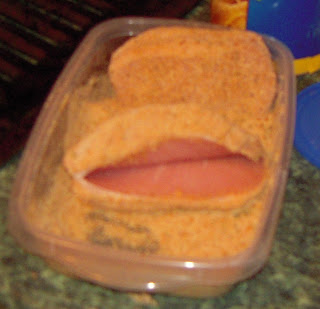 I drizzled some Extra Virgin Olive Oil in a brownie size pan.  Instead of dipping the pork chops in egg then breading, I rubbed olive oil on them lightly and then patted them in Italian Seasoned Breadcrumbs.  Worked well.  I held them open and stuffed them.  Now I didn't make homemade stuffing(I know, GASP!) which would of tasted so much better.  But instead I used Stove Top (Yet another GASP!).  Then I laid them in the pan.  I cooked them about 10 minutes in a 400 degree oven on one side and then I added the rest of the left over stuffing in the pan and flipped the pork chops over to brown the other side then place a pat of butter on each pork chop.  The breading provided a nice color and crisp on the edge and I think it helped coating the pan with olive oil which also added extra flavor. 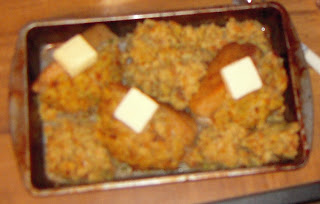 *Pats of butter placed on chops, yet again another blurry pic.
They came out pretty good and were perfectly done.  Since I was feeding the kids this meal I wanted to make sure there was no pink.  I fear my kids getting food poisoning.  I've had it twice from restaurants, let me tell you, it's not fun! 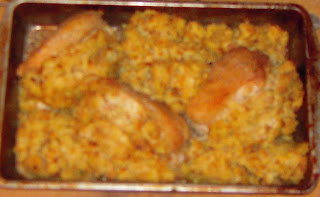 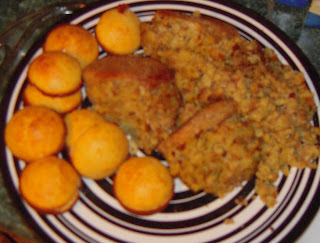 *Stuffed Pork Chops, Additional Stuffing and Jiffy Corn Muffins (I didn't like the Jiffy Corn Muffins, I usually use it to make my Corn Souffle.  I thought I'd try the muffins, they were too dry, I like a sweeter more moist corn bread)
My serving platters are either too big or too small....  I need to get one that is just right for us! 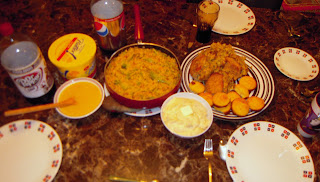 *A semi set table.  My daughter did this and for being 7 I think she did an awesome job! 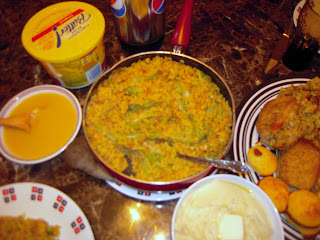 *Believe it or not but the rice was Rice A Roni's Broccoli au Gratin Rice, I added Broccoli Spears to it.  My family loves the Broccoli au Gratin Rice from Rice A Roni.
So this is my recipe.  I hope it helps you, gives you pointers and make it yourself.  They were served up with a variety of dishes.  It was like Thanksgiving.  We had a carb filled feast.  We had gravy, stuffing, broccoli cheese rice and mashed potatoes and I also made some Jiffy Corn muffins.  We enjoyed a good dinner at the table.  I haven't made a meal this big in a while.  I do though think our eyes were bigger than our stomachs.  We have lots of leftovers but won't be wasted since it will make for a great lunch tomorrow with the kids. 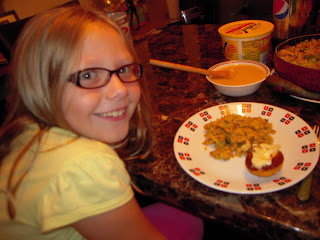 My daughter thoroughly enjoyed her dinner and I would of taken a picture of my son but he was to busy eating.  He couldn't get enough! 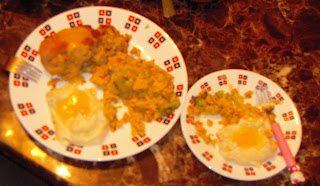 *I ate and fed my son at the same time, hence the smaller plate.  I don't think he cared too much about using his sister's Hello Kitty fork to which she's out grown.
Did I mention I also made dessert?  It will be in the next blog....

Preheat oven to 400'F.
Coat a brownie pan with Extra Virgin Olive Oil
Drizzle and coat your boneless butterflied pork chops and coat in breadcrumbs
With the pork chops open, spoon in stuffing to top.
Place in pan and put in preheated over and cook on one side for 10 minutes and then flip stuffed pork chops and place a pat of butter on top of each stuffed pork chop and then place back in oven for another 10 minutes.
Take out of your oven and let chops rest before cutting into to maintain juices.
Serve with any additional sides you like.

Next time I do think I am going to sear the meat in a skillet and then place in the pan with some chicken broth.  That's probably the only thing I would do differently.

Happy Cooking and of course Happy Eating!
Annamaria
Posted by Artbyasm at 5:03 AM