Spiced Pumpkin Cupcakes with a little Faith, Hope and Love 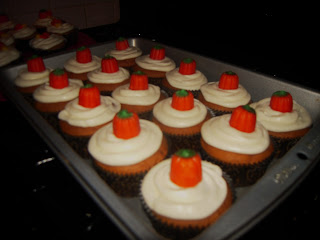 One of my favorite creations this weekend is the Spiced Pumpkin Cupcakes.  I made these for my daughter's Communion Class.  Her birthday was last week and I wanted to make something for her class but between school, gymnastics and communion class I had to space the treats out.  It's been so busy that I just didn't want to do it all at once.  I went to Walmart one night to buy some last minute additions to my daughter's birthday presents.  I barely have time to do anything myself because I always have the kids so my only alternative is to go shopping when the kids are asleep and my husband is home.

When I went to Walmart they had all this Libby's pure packed pumpkin.  My eyes just became wide opened.  I was so excited, it meant Fall was really here, my daughter is turning 8 and also means Thanksgiving and Christmas is coming.  So I thought to stock up.  Big cans, small cans, spices, baking goods and then I also saw Spice Cake Mix.  I thought Spiced Pumpkin Cupcakes would be perfect as a treat for communion class and put cute little candy pumpkins on top with cream cheese frosting.  Yum!

I love Spice Cake and I love Pumpkin, so does Sofia.  So I asked Sister Josephine if it would be okay to bring in a treat to class and she insisted without any hesitation.  I love my church so much.  It's still old school. All the nuns are still in full robe and habits just like when I was a kid.  This is also the same church that baptized me and baptized my children and it was all done by the same priest who I love, he's like an uncle to us.  I think Father Pat is the reason why I have been strong in my faith and the close family feeling we have in our church even though it's a huge church with many parishioners.  Although there are many of us, I mean hundreds, we all pretty much know eachother and there is definitely the factor of 6 degrees of separation there.  We are all connected and that is due to the our love for the church and the love the church gives back to us.  It's almost unreal how the same priest who conducted my baptism, first confession, communion and wedding will be doing the same for my children.  Who knew that the time when I was making my communion, one day my daughter would be walking up the same aisle to make her communion.  What a blessing it has been.  I have celebrated life in this church as well as mourned death in this church.  It's so much part of my life that I can't imagine being anywhere else.  Going to mass and looking up at the ceiling and seeing the paintings there and then recollecting doing the same thing when I was a child during mass.  It's truly an amazing experience.  Then there is the fact of walking out the door and looking across the street to the street where I lived when I was born until the age of 3, when my parents and siblings came here from Italy and all the other Italian immigrants who did the same and feeling sad that the neighborhood isn't the same and seeing my old house in shambles after such hard work my parents did to repair and fix in such a great condition only to be ruined by future occupants.  It kind of angers you.

Nonetheless, I am grateful to the memories and passing it on to my children.  Funny thing about it all is that my daughter was so nervous starting communion class.  She was previously in Catholic School by our home but I didn't like it, I guess I had expectations that all Catholic Churches are the same and parishioners were all treated the same.  Of course after 2 years of her enrollment I quickly realized this is not true.  Sofia went to public school after that and it was the best thing we did.  I feel more of a family unit at her school than I did at the local church.  I didn't have her go to our family church for school because it isn't close and not I know I just couldn't do the drive.  Had our church been closer that is where my children would attend, I don't mind the Sunday masses and being involved at my church.  Being so occupied with the bad experience at the old school my daughter attended, I wasted a lot of time not going to my church.  But now we're back and I am glad we are and my priest is certainly glad we're back.  After all my parents were still going and I was no where to be seen and it was hard to admit I was at a different church.  With Sofia being so nervous she wanted to leave before her first class even started.  I told her it would be okay and Sister Josephine immediately consoled her, I was relieved.  I think I just realized I was nervous as well.  How weird it was to walk in and step on the stairs that I did when I was a little girl and had my Sunday School classes, to step on those stairs again almost made me cry.

Walking in, seeing the halls and classrooms it was a blast from the past.  Then I noticed a guy in a bright construction shirt and at first before my brain kicked on in the morning, I thought to myself that he looked familiar.  Well duh, it was my younger cousin (actually my second cousin but it's all the same to our family).  He was there signing up my 3rd cousin (his daughter) Aliyah for communion class, Sofia and I both were relieved, she knew someone, her cousin was going to be in class with her.  Weird how we didn't know she was taking classes, how did we not talk about it?  Then my friend from school, her child was in the class, weird!  Then I walked out after I left Sofia in class and was going into church for mass in Italian.  Then I walked out and saw my other cousin Joe (first cousin) and his son Joey was going to be in communion class too!  Oh geez, it was like a family get together, I said to them, well since we are having our kids making their communion this year we better let eachother know when we plan on having our communion parties.  It was going to be a busy Spring for our family with parties!  LOL!  I think we were all relieved that our kids would be in class together.  I went to mass.

I walked into church and mass didn't start yet.  I was wondering okay, isn't there an Italian mass?  I said wow now it must be too early for me and I was making up my own mass schedule.  I remembered I was just there a few weeks ago when we had the memorial mass dedicated to my father and I was there at 10am.  Then I saw Father Pat come out, he waved at me.  I figured okay, I will just sit in church and wait to go and get Sofia out of class.  Then the dimmed light became brighter, people started coming in.  Father was getting ready, could it be that mass was late?  Maybe it was really at 10:15am.  I was sitting there, I had already read the mass in English in the book while I waited.  Mass began and as I always do I looked around to see who was around.  In the way back of the church I saw two women who look alike, in fact they could almost be twins.  It was my aunts, my dad's sisters.  I got up and went and sat with them and they said how they went back and forth about whether it was me just by seeing the back of my head.  So now every weekend, I sit with my Aunt Vittoria (Zia Vicky) and my Aunt Domenica (Zia Calina).  It's nice to be there with them.  It's kind of funny, I mean how many family members can I run into in one day?  Now I know my family is one of the biggest Italian families in Ohio but seriously this day was just crazy!  It's funny no matter what, our lives are very much intertwined.

After mass in Italian, I went and got Sofia.  I walk in and I see a friend of the family.  Her son was in communion class too.  Really?  Sofia plays with him in the summer months because his grandmother and my mom not only are friends but they live on the same street.  We hugged and were glad to see eachother.  My world just got smaller.  So pretty much about 85% of the kids in her class, she already knew.  I knew instantly it was a sign and it was going to be something good.

Thank you for enduring my story.  I think how funny food, faith, hope and love all come together.

Here is my Spiced Pumpkin Cupcakes that I made.... 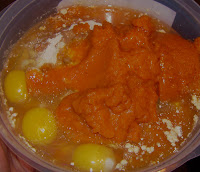 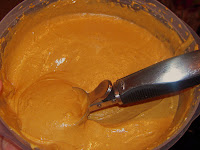 Place cupcake liners in muffin pan and scoop enough batter about a little more than half way to the top of the liner.  I use a Ice Cream Scoop to do this it fills about the right amount. 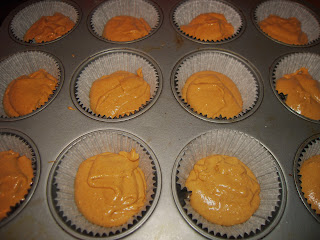 Bake cupcakes about 18-20 minutes until toothpick inserted into cupcake comes out clean. 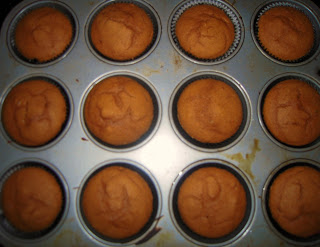 Place frosting in a sandwich or ziploc bag and snip the corner, swirl frosting on top of cupcakes. 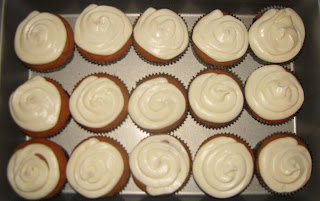 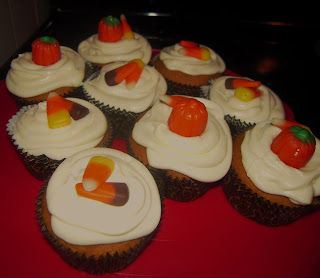 Refrigerate until ready to serve.  Most of all ENJOY! 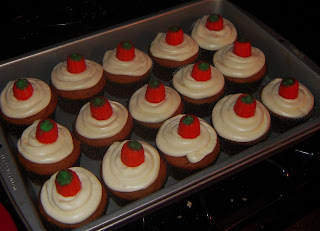 I want to end this blog with the my sweet Sofia.  She had a Halloween party that her friend Dominic invited her to.  Here she is as Draculaura, who is the daughter of Count Dracula, she is a character from Monster High which is about Monster Teens who attend school and live in their Monster Teenage World as the children of some of our famous Horror and Historical Creatures.  My son is being a bat, Draculaura has a pet Bat named Count Fabulous and is her sidekick which we decided Johnny would look adorable in!
Check out Monster High at www.MonsterHigh.com

Posing with her doll: 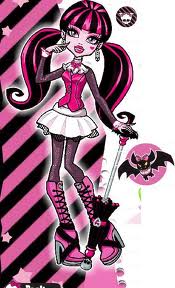 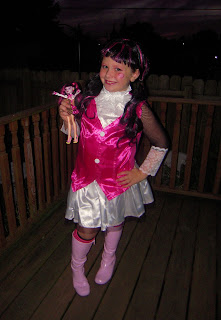 Have an awesome weekend!