Weirdest thing happened, we went to Strongsville Mall this past weekend and as we were getting our son into the stroller we saw my mother in law coming out of the mall when she was done shopping. (She also saw thw movie "The Help" and said it was awesome!)  So we had her come in with us because we were getting the kids their haircuts. My daughter is starting school so I thought she could use a fresh start trim for school and my son's hair was starting to look Joan of Arc (a bob with short bangs). I had cut his bangs and then his long hair almost looked like a bob. It was well over due for a cut. We went to Master Cuts because they were the only salon that weren't booked even though they almost didn't take us because we were 15 minutes late. If I had more time I would of gone to my cousin's hair salon, but it's sometimes hard to get her because she's always busy and Alto Capelli is not open on Sundays. It's easier to handle the kids when my husband can help me wrangle them.

So anyway, we got their haircuts. My daughter just got a trim with a bit of long layers. Pretty Basic. My son got his hair cut, which was a little more work and being 2, it's not easy. The girl pretty much did the best she could, I've seen better and the blending wasn't great. I like to keep his hair a little long because he looks silly with short hair. So the first part of my review is to say that I really wouldn't go to Master Cuts again. It was one of those major chain hair salons like Great Clips or Best Cuts. I think getting a hairdresser that is really talented in one of those salons is like a diamond in the rough. So next time I will pass. Not to mention the fact the girls gave me dirty looks and an attitude for being 15 minutes late. They say they close at 6pm and we were there at 5:15pm and they had no other customers and they usually only take walk ins but I called ahead and said we would be there around 5. So they knew we were coming. They weren't even closed and the turning customers away. They were technically still open so why would they do that? Bad business and customer service move and such a turn off. I could of smacked that attitude right out of the girl because I already wasn't in the mood for dealing with someone's attitude.

Then after the mall since it closed at 6pm, which sometimes I wish the mall would close later on Sundays than just on the Christmas Holiday season. It seems like there is not enough hours in the day and my husband only gets Sundays off being a mailman, so he tends to get a slow start on Sundays. 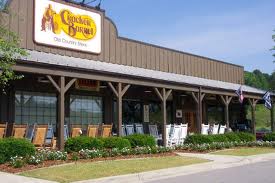 Cracker Barrel in Brooklyn, Ohio
We decided to get something to eat, my daughter chose Cracker Barrel. I could of gone for some Macaroni Grill since we were so close anyway, but since Cracker Barrel was close to home and it didn't sound so bad we went there.

Surprisingly it wasn't too busy when we entered and I couldn't believe that the Halloween AND Christmas Decorations were already out for Sale. Okay I could understand maybe Halloween but not Christmas too? I felt suffocated at the idea of the holidays creeping up on us. Of course I wanted so many of the decor items! I could go crazy! But I had to be frugal because my daughter is starting school and the new session starting for gymnastics next week. So pass, maybe next month?

Okay we sat, we got a great waitress and brought biscuits out so we could give the kids something because they were both very hungry, well so were we. My mother in law came with us an she decided to have my daughter sleep over so the next day they would go and see the Smurf movie. My daughter loved it.

We ordered our food and we all ordered something different. My husband got the Pot Roast dinner, My mother in law got the summer special which was the Brisket, I got the Sunday special which was the Fried Chicken Breast Filet dinner. My son got the Mac & Cheese and my daughter got Pancakes with Bacon.

We got our food and I didn't like the chicken, I was contemplating between the meatloaf and the Friend Chicken and the waitress said the Fried Chicken.  So that's what I got.  It was so over fried the chicken was dry and the breading was burnt.  So I sent it back and got the meatloaf instead, which was really what I wanted in the place. 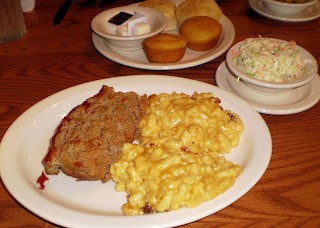 (My meatloaf slice was bigger than this, this is just a random photo, I forgot my camera!)
My husband said his Pot Roast was good and tender, my daughter loves their pancakes which of course they are.  My meatloaf was good.  I think though mine is better.  My mother in law said her brisket was overdone and dry, and honestly, it didn't look appetizing and it was like 3 over cooked dry strips that looked tough.

Our sides always include the carrots, macaroni and cheese, hashbrown casserole, mashed potatoes, corn, etc...  They were great as always.  But I do think their mashed potatoes were salted enough or buttery enough.  They were kind of bland and definitely needed the gravy.

Our belly's were full and enjoyed a nice dinner together.  I really like the Brooklyn Cracker Barrel.  I remember driving almost an hour with my family to go to Cracker Barrel in Akron or Sheffield.  But now for years we have had one so close, so the nostalgia of Cracker Barrel isn't a big deal anymore.  Although they have great dishes that no one else can make like them.  I could really do without the Saw Mill Gravy, I don't like it.  I prefer Sausage Gravy to top my biscuits and Country Fried Steak, which is awesome at Cracker Barrel as well as the Chicken Fried Chicken.  Breakfast is always good at Cracker Barrel.

I know they are famous for their hashbrown casserole but I have to tell you, they must have the BEST macaroni and cheese!  It is so good!

For my son's first birthday/christening party I had Cracker Barrel cater the sides, I got a big pan of the hashbrown casserole and macaroni and cheese.  Let me tell you, my guests ate it up!!!!

So yes they do cater, you just have to call them in advance.  It's a great price and they can do big pans and half pans.  Kids love that mac and cheese so the kids went crazy and so did the adults.

I got my main dish which was Fried Chicken from Mr. Chicken in Parma and also got their biscuits.  100 pieces of chicken!  It was so good and fresh and made right in time for me to pick it up.

We always have so much food at our parties.  I like to get mine catered instead of cooking sometimes because not only do you end up not spending as much as if you would make it yourself but you have so much more time to focus on having fun at your event.  I do make some things, maybe snacks and such but mostly catered.  I at one time had 3 different places cater 1 party....  I am always wanting to satisfy all guests and tastes.  The left overs are great too!

So enjoy my all over the place blog tonight or morning....  I hope it gave you some ideas.  Sorry I don't have many pictures up.