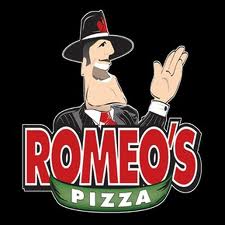 *Romeo's Pizza
The other night my husband wanted pizza, big surprise right?  He could eat pizza all the time.  Not me, despite the fact I am 100% Italian.  Great thing about Romeo's is that I could have something totally not Italian or Pizza related items.

Okay, a debate with me, I rather get their pizza in a half she than a round.  I think the pizza in a round shape doesn't give the taste of Romeo's good representation.  Just my opinion, my husband although disagrees and he could go round, square, octagon, rectangular, he doesn't care, he loves it.

Hilarious Side Story:  One night, of many nights of ordering from Romeo's, we decided to get pizza.  My daughter insisted she didn't want the round pizza.  She wanted the round pizza in triangle pieces, as she describes.  Whine Whine Whine, seriously, about the shape of your pizza?  But could I complain because I prefer it square?  LOL!  Well we went on to get a half sheet.  Mine of course vegetarian (not that I'm vegetarian) and my daughter and husband prefer Pepperoni and Sausage, mostly just Pepperoni, so we do half and half.  Anyway, my daughter insisting she wouldn't eat the squares, my husband in the kitchen said, "No I got round too!".  I was like why would he get a round pizza too?  Then he comes in the living room with 2 small triangular pieces of pizza for our daughter.  Then it registered, he tricked her, he took a square piece and cut it diagonal to make it into triangles.  She was just fine with it, but I took a look, then it registered and I fell off the couch laughing so hard.  My husband and I were laughing so hard because of what he did, that we could barely breathe.  It was one of those things where you laugh so hard, you just can't stop.  I mean tears, almost peeing your pants Hilarious!  She just kept saying while eating the pizza, "What's so funny?"  She didn't even realize it.  We did eventually tell her and then of course she tackles us and laughs with us for playing a trick on her.  Hey, now she eats Square Pizza!  Point for the Parents!  LOL!

I actually have 2 photos to share with you, of course piece of pizza are missing because when I go to take photos it's already too late to get it in whole.  These pizzas are from 2 different nights of Romeo's pizza.... 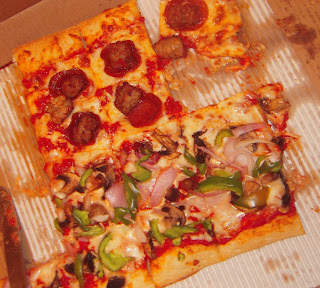 ROUND:
Pepperoni and Sausage 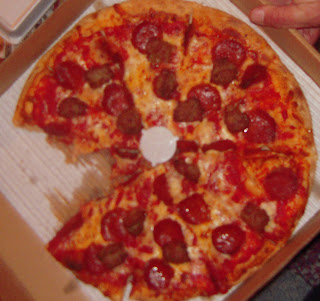 Well as you see above, they both look great.  I think the difference really is that for me the square has more of a thicker base where the round is thinner and edges are crispier.  Most people don't really see or taste the difference.  I prefer to order the Half Sheet Square.  The pizza is great reheated in the oven or microwave the next 1-2 days.
Now we've also had their wings, I tend to ask them to make them extra saucy, I like a lot of sauce on my wings.  They also have boneless wings, which are great pieces of chicken breast.  They are fried and breaded and then tossed in the sauce.  The bone in wings are not breaded.  The sauces that are my favorites is the Teriyaki, Hot and Parmesan Garlic.  YUMMY!  Sorry I don't have a pick of either.
To add to the list of things we have had is the subs.  I love the Chicken Teriyaki, Philly Cheesesteak and The Italian Burger (which is like a Roman Burger from Mr. Hero but less greasy).  My husband loves their Godfather sub.  I've tasted it and it is also good in my opinion.  I have to tell you, every time I order a sub, I always ask for extra cheese.  I love cheese, it's an addiction really.  LOL!
Here's the Cheesesteak, it's not the best picture but you get the idea:
It comes with Peppers and Onions but I also add Extra Cheese and Mushrooms.
I just wish they would of grilled the peppers a little more, they were still crunchy. 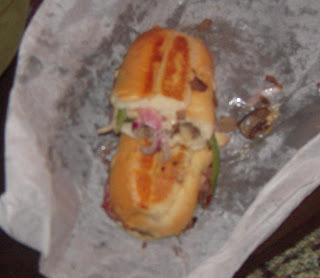 To accompany our dishes we have had their Onion Rings that are battered which I prefer to than breaded.  The downfall to ordering the wings is that when you get them, the condensation of the container makes the Onion Rings no longer crispy but limp.  They still taste good but not at their peak taste.
Romeo's has a good staff that we have dealt with in the Parma location.  One night they didn't answer their phone and we assumed they were closed.  They called us back and said they were going to be there late making dough so if we wanted something, we could order for Pick Up.  Wasn't that nice?  I think so.
So try out Romeo's Pizza.  They have won awards in Ohio and in other states for best pizza.  They have many locations.  I like getting mine delivered, I don't mind the wait.  When my husband picks up the food, which it's almost on the other side of Parma from where we live, it gets cold when he picks it up.  So I rather have it delivered.  I am grateful they deliver to our side of Parma as well.
There's nothing more I can tell you.  They are great pizza for parties.  They also cater other foods for events.  Check them out online.  Link below.
Go ahead and try some of the best pizza in town!  So many locations!  Cuyahoga Country, Summit County and Medina County.
Website:
www.RomeosPizza.com
Facebook Page:
On Facebook

Mangia Mangia,
Annamaria
Posted by Artbyasm at 3:37 AM