When Busy & In A Pinch: Pita Pizzas are a way to go! 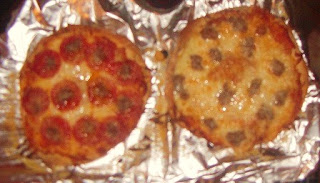 If you haven't thought of it or have had them then your missing out. We all want to make homemade pizza, but honestly sometimes it entails a lot of work especially if you make your own dough, sauce and cut up all your toppings.

When I was a kid, it seems that's where all my adventures in an Italian family and food, my dad was such a whiz in the kitchen. Many times he would go to Aladdin's Bakery in Cleveland which makes fresh baked Pitas after work because it would be on the way home or at the grocery store he would buy some pitas and my dad would make Pita Pizzas. I am telling you, it's great and healthy and the funny thing is, it tastes like authentic Italian Pizza from Italy.

In Italy, you won't find pan pizza, deep dish or regular crust. You get thin crisp pizzas that are soft in middle but crisp along the edges. When making Pita Pizzas you get that same texture and taste. My nephew Anthony loves it! 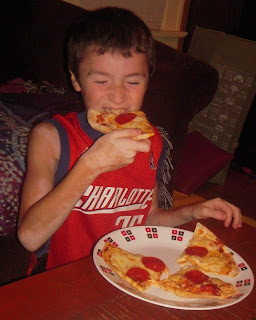 Now you can make your own sauce still or you can get a jar of pizza sauce, which we do a lot of the times. Our favorite is Mid's Pizza Sauce. Mid's might be hard to find. I am not sure if it's a local thing but some people I know in other states never heard of it. The make great spaghetti sauces too. I don't buy Prego or Ragu. If you do and your family likes it , more power to you. You have to understand, I am a full blooded Italian and using those brands is a no no. That's why I joke around and named my blog "It's In There..." Like Prego's motto ya know. Remember the commercials? Any way, if you never knew this before the word "Prego" in Italian means "You're Welcome". Funny huh? How does that have a connection with spaghetti sauce? So back to Mids. Honestly it's the closest thing I think as an authentic sauce. It's a little more expensive but really tasty!

So let's get to the process of the Pita Pizza.

-You'll need some Pita Bread (enough to feed whom you want, usually 2 per person is good but depending on your toppings will depend on how full you'll get.

-Shredded Cheese, now you can use a combo of cheeses. Cheddar and Mozzarella is one of my favorite combos on pizza, Provolone, Parmesan, etc...

-Then toppings:
Peppers, Onions, Artichokes, Capers, Mushrooms, Pepperoni, Italian Bulk Sausage, Anchovies (a shout out for my dad) and anything else you can think of.

Assemble the Pita pizza like you would a regular pizza, Bread, Sauce, Cheese and Toppings. If you are using raw meat like "Bob Evan Bulk Italian Sausage", then you just want to make the pieces small, like nibbles. This will ensure it cooks all the way. Peppers might take a little longer as well as onions. I prefer using fresh mushrooms instead of the canned ones. Way better and fresher and now you can buy them pre-sliced.

Bake them on Foil or Parchment Lined Baking Sheets at 350 Degrees Fahrenheit. Cook until thoroughly cooked if using raw meat or until cheese is melted.

You can make it as healthy or as over the top. This is also a great recipe for a for guests, you can prepare all your ingredients and put them in containers. Have everyone make their own Pita Pizza. It's a great social event and it gives everyone to be creative and have the toppings they want. Also great for Kid's Birthday Parties.

My husband loves them and he first had them when my dad made them. My husband who is the biggest pizza lover I know and he was so amazed when he first tried them He was like, Who would of thought? Well my dad did and we would gobble them up. I think my dad had fun making them. He got creative and it was quick which is great for a speedy meal for busy families. 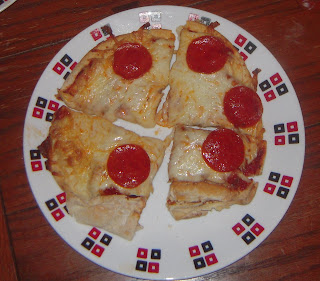 So I didn't think I needed to make step by step pictures so I just took the pictures of the pizzas my husband made for himself. I think he tried to be creative with the sausage and pepperoni one by layering the 2 meats like eyeballs, at least that's what they looked like to me. But as you can see they look very tasty, they are.

Another great trick is, you can go as far as making dessert versions on Pita Pizzas. I love making a Smore one and a Nutella and Bananas one. With the smore one, just take a pita, put some chocolate chips on top. Cook until chocolate has melted. Then take it out of the oven and top with mini marshmallows and put back in the oven until marshmallows puff.

Nutella and Bananas you just want to spread Nutella on the Pita and then put sliced bananas and bake until warm and edges begin to crisp. Enjoy!

Either way you make them, your house will fill with the aroma of pizza. It might smell like you've been cooking for awhile but really you whipped something up almost as good as the real thing from the Pizzarias in Italy! 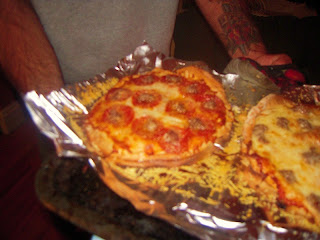 Buon Appetito!
Annamaria
Posted by Artbyasm at 12:44 AM